Hiccup, Not a Glitch

After suspending treatment last Friday because of low blood counts, I went into DFCI on Tuesday hoping that I had recovered enough to resume the Vel/Rev/dex therapy.  It was not to be.  Despite my having skipped the Velcade on Friday and stopped taking the Revlimid, my numbers were actually worse on Tuesday!  My white blood cell count (WBC) dropped from 2.4 to 1.8, and my absolute neutrophil count (ANC) went down from 994 to 750.  Gulp!  At least I hadn't become officially neutropenic, which is when the ANC drops below 500.

I was obviously disappointed.  Again, my Velcade infusion was skipped and I was told not to take either the Revlimid or the dexamethasone until my neutrophils have recovered.  To help this process along, I got a shot of neupogen to stimulate white blood cell production.  Muriel Gannon reassured me that this is a very common problem, and it is just a hiccup, not a glitch.  She was pretty sure the problem is due to the Revlimid, not the Velcade.  This surprised me at first, because during my induction therapy, I was taking 25 mg of Rev without any problems.  Now I am only taking 15 mg.  Muriel said that the reason is my stem cell transplant.  My body still hasn't fully recovered and I am more sensitive to the drug side effects.  I guess that makes sense. 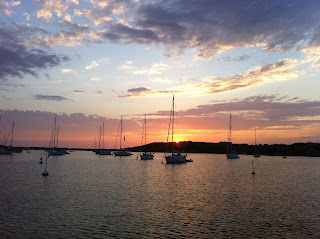 I immediately put all this behind me as I drove directly to Dartmouth, MA and embarked on a relaxing two-day sailing adventure with my friend, Lew.  We moored his boat for the night in Cuttyhunk and watched the beautiful sunset as we ate oysters on the half shell delivered to our boat and grilled filet mignons for dinner.  Not too shabby!  Lew makes a mean martini, which I have to admit I imbibed, but don't tell Dr. Richardson.

The next day, another friend, Sam, came over on the ferry, and we sailed to Menemsha on Martha's Vineyard, where we picked up some harpooned swordfish (yum!).  Dinner that night was even more delicious, if that's possible. We all went swimming, but I have to say that on a relative scale, I would rather have an IV stuck into my arm than dunk my whole body into the cold Massachusetts ocean.

I came back home yesterday, happy but exhausted, and collapsed until this morning.  I went back into DFCI with my fingers tightly crossed, hoping for the best.  I guess the neupogen shot did the trick, as my WBC has jumped up to 7.7 and my ANC skyrocketed to 6,160!  Now, I am back on the consolidation therapy, but my Revlimid dose has now been reduced from 15 to 10 mg going forward.  I have next week off before going into the final cycle of my Vel/Rev/dex consolidation protocol  I hope there are no more glitches, hiccups, or whatever to contend with as this therapy continues.
Posted by Bill O'Halloran at 3:52 PM