Yesterday I checked into Brigham and Women's Hospital (BWH) to undergo my autologous stem cell transplant (ASCT) process.  The room is spacious, and the staff is efficient and friendly.  Gretchen, Jeff, and Brian all came with me to make sure I got settled in OK. My first night was uneventful.

An interesting side note.  I have been telling everyone that I may be allergic to sulfa drugs.  This is because a few years ago, I was given a sulfa antibiotic to combat what the doctor thought was a urinary tract infection (UTI, for those in the know).  I developed a rash a few days later, so the doctor said it was the sulfa drug.  However, I was never totally convinced of this, because I was later diagnosed with Lyme Disease, which also can cause rashes as well as some of the symptoms attributed to the UTI.  I therefore remain unsure about both the UTI and the sulfa allergy.  In any case, the staff here started me on Bactrim last night as a prophylactic antibiotic.  This morning, the attending physician, Dr. Shipp, asked me whether I was really allergic to sulfa.  I said I wasn't sure, so the decision was made to keep giving me Bactrim (a sulfa drug) and see how I react.  I find it a bit odd that they would go about it this way.  I think it was a pretty rash decision, but so far so good.  It would be good to find out that I can tolerate sulfa drugs, because they are the antibiotic class of choice for many complications I may encounter in the future with my MM. 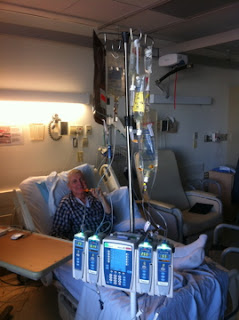 Today at noon, I was due to receive my first dose of melphalan to kill off my bone marrow.  They started me on fluids to hydrate me around 10:00.  When 12:00 came and went and the Governor didn't call with a pardon, they began the infusion.  It took about a half hour.  I chewed on ice chips and popsicles before, during and after the infusion to minimize the chance of developing painful mouth sores from the chemo.

So far, I still feel fine.  However, the effects of the melphalan should kick within 24 to 48 hours, so the moment of truth is nearly at hand.  Here is a list of possible melphalan side effects from Wikipedia:

Anyway, tomorrow, I get my second and last infusion of melphalan.  Then on Tuesday, I will get half of my collected stem cells re-infused.  After that, the rest of the time here will be spent recovering.
Posted by Bill O'Halloran at 9:28 PM