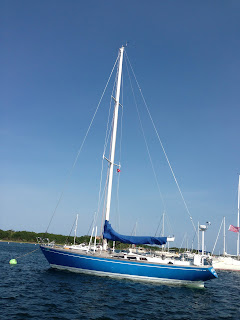 For any of you who followed our progress on Dreamcatcher at Block Island Race Week, you know that we didn't fare too well in the competition.  For the week, we tied for 6th place out of the 10 yachts.  We usually do better than that, but the field was intensely competitive this year.  For example, on one day we finished 7th in corrected time over the approximately 3-hour race.  However, had we been 3 minutes quicker, we would have been 3rd.  Here is a picture of our boat, a 58-foot Swan.  It weighs 36,000 pounds, so it is hard to get it going in light airs, like we had most of the week.

That's OK though.  We had a wonderful time, as usual.  After missing last year due to illness (both mine and the skipper's), it was a real joy for us both to be healthy enough to enjoy this annual event again.  We're already looking forward to next year.

The week took a bit of a toll on me, however.  I came down with some kind of low-grade infection, which resulted in my feeling crappy and tired most of the week.  I was exhausted after every day of racing, so I napped before dinner and went to bed as soon a possible afterwards.  I have to say, however, that once I got on the water and began racing, I felt perfectly fine!  I was glad to get home on Saturday and catch up on some much-needed rest.

Since I am still not feeling 100% I called Mary McKenney, Dr. Richardson's nurse today.  She told me to immediately stop taking my daily Revlimid dose and get my blood tested ASAP.  So I'm off to see my PCP to get my white blood cell counts checked...

...OK, I'm back.  I had my CBC-diff blood draw taken, and I go back tomorrow morning to get the results.  I was also running a mild fever of 100 degrees, which probably explains why I still don't feel top notch.  I hope that suspending the Revlimid for the next week will help my body recover more quickly.  My regular monthly visit to the Farber is next Tuesday.

In the meantime, the whole famn damily (except Holly) is headed up to Champlain, NY, to celebrate the 4th at the farm.  I will be transporting contraband fireworks that I bought in New Hampshire, but have been storing in Massachusetts, where they are (inexplicably) illegal, one of only 4 states that ban fireworks.  To compound my scofflawness, I will be hauling this illegal cache up to New York, another state where they are (inexplicably) banned, for a July 4th extravaganza display.  Brian, Pam, and Logan will be coming up from New Jersey, where they are also banned.  If Joe Biden were to drop in for the festivities, we would have all 4 states that ban fireworks represented (Delaware is the 4th).  In a perverse way, I get a bit of a kick out of thumbing my nose at such a stupid nanny-state law.  And if I get caught?  Maybe I'd never qualify for a security clearance again.  Boohoo.