Okay, I usually only post about once a week or so lately, but I have a bee in my bonnet now, so here goes another one.

There was a very long article in the Sunday Boston Globe today on Lyme Disease.  Here is the link to the article:  Drawing the Line in the Lyme Disease Battle.  I have to say that this really got my dander up!  I am one of the ostracized Lyme Disease sufferers that the medical community has totally disregarded to this day.  I spent an entire summer several years ago suffering numerous debilitating symptoms, such as anemia, joint pains, severe headaches, shooting pains, double vision, fatigue, blotchy rashes, two cases of Bell's Palsy (one on each side of my face), and peripheral neuropathy, just to mention a few.  I spent most of the summer in bed sleeping, wondering what was wrong with me.

After my first case of Bell's Palsy, I had blood tests done for Lyme Disease, but as usually happens, the test came back negative (several parts of the test were positive, but the strict criterion for a positive diagnosis is very high).  These tests are set up by the Infectious Disease Society of America (IDSA) with such a high threshold to prevent false positives that the the probability of a false negative is very high.  Therefore, many people who may actually have Lyme Disease won't get a positive reading on this test.  That was the case with me.

My PCP was a traditionalist, so he looked for everything else that could possibly be wrong except Lyme Disease.  Along the way, I was diagnosed with a urinary tract infection (UTI) which I didn't have.  Soon after I developed a rash all over my body which he said was allergy to the sulfa drug I took for the UTI.  What a joke!  After my stem cell transplant last year, I took a full year of the sulfa drug Bactrim every day.  So much for that diagnosis!  Then I was told I had fibromyalgia rheumatica.  I kept telling him that I thought I had Lyme Disease, but he told me one time to "get my head out of that hole".  I had done a lot of research on this subject, and his dogmatic rejection of the possibility that I might have Lyme Disease was incomprehensible to me.

That's when I wised up.  I searched out a reputable Lyme literate naturopathic doctor in New Hampshire, Dr. Margrit Mikulis.  What a godsend she was!  She immediately diagnosed me with Lyme Disease and prescribed a double dose of doxycycline for about 4 months.  After the first few weeks, I felt much better, and after a couple of months, all my symptoms disappeared.  Thank you so much, Dr. Mikulis!  I don't know where I'd be without you.

What the fuck!  I just don't get this shit.  It's really not that hard.  The ISDA has paralyzed the medical community to prevent diagnosing and treating Lyme Disease in the most cost-effective and efficient way possible.  Here is the real deal.  Any person who goes to a doctor with a tick bite should immediately be given a two week prescription of docycycline, no questions asked!  I mean, come on folks.  Doxycycline is cheap and has minimal side effects.  Teenagers are often given doxycycline for a year or more to control acne, so what's the problem with a two week prescription to either cure or prevent Lyme Disease.  I don't get it!

My daughter's boyfriend, Ryan, grew up in Nantucket, a hot bed of Lyme Disease.  Anyone in Nantucket who goes to a doctor with a tick byte automatically gets a prophylactic dose of doxycycline, no questions asked.  This is how it should be everywhere.  The downside of letting this pernicious disease invade the body and cause all of the symptoms I suffered and many more is terrible.  Why risk it?  If you get it early enough, the cure is simple and painless.  After it gets a hold of you, however, it is a lot tougher to get rid of. 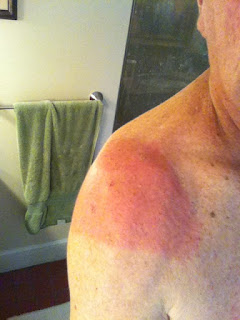 After this episode, my PCP retired (thank you) and I now have a new PCP, Dr. Guidi.  He is much more in tune with reality than my former doc.  After my first bout with Lyme Disease, I got it again.  This time, I had a huge rash which made it easy for him to diagnose (see picture).  He didn't hesitate to give me a two week prescription for doxycycline, and that worked fine.  I recovered easily...no problem.


Let's fast forward to two weeks ago.  I was in the shower when I noticed a bump on my inner thigh.  I scraped at it with my finger nail and finally realized it was a nymph tick.  Shit!  I got most of it off, but there was still a little bit left in.  I  called Dr. Guidi and went to see him later that day.  The jaws of the tick were still embedded, so he used tweezers to get them out.  He wanted to know what I wanted to do.  I said I wanted a full two week dose of doxycycline, which he gave me without hesitation.  However, after one week, I had no fever or any other symptoms, so I stopped taking it.  So far, I feel fine.

As a postscript to all of this, my battle with Lyme Disease may have been beneficial after all.  Because I kept going to the doctor for my ailments, I had numerous blood tests.  Along the way, Dr. Guidi noticed than my protein levels seemed abnormally high.  That's when he referred me to a specialist, and that led to my diagnosis with Multiple Myeloma.  Maybe a lot of the symptoms that I had ascribed to Lyme Disease all along may actually have been due to MM.  I will never know.  However, I was fortunate to have been diagnosed with MM before serious damage had a chance to  affect my bones or kidneys.  Perhaps that is why I have been fortunate to have achieved such a good response to the therapy so far.

So what can I say?  Here's to Lyme Disease?  I don't know.  As Gretchen likes to say, "Everything happens for a reason".  Well, I don't know about that, but if it weren't for my travails battling Lyme Disease for a couple of years, I may not have stumbled on the real threat to my life in time.  Who's to say?