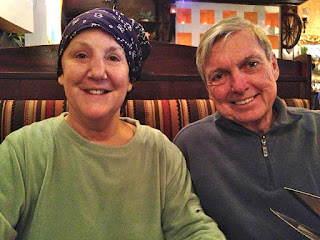 On Wednesday, Gretchen was transferred from Beth Israel Hospital to a rehabilitation facility in Salem, NH.  There, she is receiving up to three hours a day of intensive physical, occupational, and visual therapies.  The place is amazing.  The staff is professional, capable, and user-friendly.  She is doing extremely well.  It's hard to believe the difference in her from a week ago.  Each day, she shows some improvement, and they expect she might be able to come home this coming Friday.  She hasn't lost her sense of humor, as we are able to kid her about her "dain bramage".  Yesterday, Gretchen got outside for the first time as Jeff, she and I went to a Mexican restaurant for lunch.  We had a good time, and as you can see from the picture, she was pretty chipper.

A couple of weeks ago, I wrote about our "new normal" as we have learned to come to terms with my MM.  Now the caregiver has become the patient and the patient the caregiver.  So we will have to start adjusting to our "new new normal".  (We engineers might refer to it as a new-squared normal.)  Life has a way of throwing an occasional curve ball, but it is what it is.

Before all this happened, I was about to publish a regular post about what I was up to.  Of course that became moot a week ago Friday.  Now that this crisis has reached a point of relative stability, I can resurrect some of what I was about to blog about then.

After my last DFCI visit, I went online to check out the pathology results of my latest urine test.  To my relief, the comforting words, "No monoclonal protein detected" and "No apparent M-spike" appeared.  I have now gone 11 months since my stem cell transplant without any recurrence.  Of  course, this is a month-to-month vigil, but I celebrate each MM-free month as a gift.

I recently had a delightful lunch in Boston with fellow MM patient, Mike, from New York.  His wife was up here for a conference, so he has some spare time.  It was a bright, crisp winter day, and we enjoyed the view of Boston Harbor from Anthony's Pier 4 restaurant.  It was such a pleasure to catch up and share news, thoughts and feelings.  It is special to be able to share experiences with fellow MM patients.  Unless one has actually heard the words that you have been diagnosed with an incurable cancer and stared into that abyss, it would be hard to fully relate to the feelings and the changes it brings to one's life.  It gives rise to an introspection that too often beforehand, we were too busy or preoccupied to focus on.  Both of us simply enjoyed the moment: the company, the conversation, the ambiance, the view, all of it.

You may remember that I previously reported that Michael was one of the rare patients who did not respond to MLN9708.  He then went on a different protocol, which also didn't work.  Fortunately, the new proteasome inhibitor, Kyprolis, was just approved by the FDA last summer for relapsed/refractory MM  (rrMM).  He just finished his first cycle with Kyprolis, and his numbers improved greatly.  Yay!  Here's hoping that he has finally found the right combination.

There continues to be good progress in the search for new drugs to fight MM.  Just 2 weeks ago, the new anti-MM IMiD, pomalidomide (trade name Pomalyst) was also approved by the FDA for rrMM.  Pomalyst could be a substitute for Revlimid for patients who become refractory.  Since I take Rev daily, it comforting to know that a powerful alternative is on the shelf should I need it someday.

Jeff and I had been planning to spend last week golfing with my brother Terry and bunch of other guys in Ocean Isle Beach, NC.  Of course, under the circumstances we both cancelled our trips.  Who wants to keep whacking a ball with a funny-shaped stick and go chasing all over the place after it anyway?  Stupid game!  Glad we missed it.  Sigh.